From Stan's upcoming duo album with Nikki Iles. Download it for free from Soundcloud.

“This intimate recording is a rare chance to hear two of the UK’s most respected jazz musicians playing tunes they love. Jellymould is proud to be releasing this beautiful record.” – Dom Sales, Jellymould Jazz 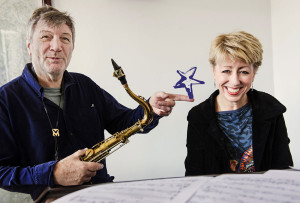 Despite a long-standing musical friendship and frequent collaborations, it has been almost 20 years since Stan and Nikki recorded their first album “Treasure Trove” together. Their new offering, “Stardust”, celebrates a shared love of songs, as well as featuring an original composition from each, and is due to be released on Jellymould in late 2015.

Below is a sample track, “Nikki’s Corner”, which can be downloaded for free from Soundcloud.